Indiana Illustrators began one year ago today, on September 29, 2010. One of the very best things about writing this blog is the comments I receive from family members of illustrators. Please feel free to write me at any time, by using the comments block below or by regular email at info@hoosiercartoonists.com. I'm especially interested in finding artwork created by Indiana illustrators and cartoonists inasmuch as their work has too often been thought of as ephemeral, and because of that, has disappeared from public view. Thanks for reading!
Copyright 2011 Terence E. Hanley
Posted by Terence E. Hanley at 8:00 AM No comments:

On Easter Sunday, March 23, 1913, after two days of high winds, heavy rains began to fall on the northern Indiana town of Logansport. By Tuesday, March 25, the Wabash River was out of its banks and beginning to inundate the city. Located at the confluence of the Eel River and the Wabash River, the longest in Indiana, Logansport was under water for three days. Miraculously, by noon on Friday, a week after the winds had begun, the river was back in its banks and Logansport had begun its recovery from that great and memorable flood.

Just east of where the Eel River flows into the Wabash, Biddle’s Island saw severe damage and destruction that spring. Both bridges to the island were out, one a wreck, the other swept away. A large house on the island, called appropriately enough “Island Home,” was also flooded. Built in the previous century by John Tipton, Island Home was long the residence of Horace P. Biddle (1811-1900), a lawyer, judge, poet, musicologist, and member of the Indiana constitutional convention of 1850. His house on Biddle’s Island “was filled with flowers, music, art, and the largest private library in Indiana of more than 8,500 books.” (1) An insatiable reader and largely self-taught, Biddle died in 1900. His house was eventually acquired by another autodidact, Wilson Reed Berry, a man who, in contrast, was not known to have read a book in his lifetime. The flood of 1913 inundated Island Home and damaged or destroyed Berry’s collection of paintings and pioneer artifacts, as well as (presumably) a letter from Queen Victoria congratulating Berry on his success as an artist. Despite the loss of his home and prized possessions, Berry soldiered on, painting until the end of his life.

Wilson Reed Berry, nicknamed Wils or Wiltz, came from a large Indiana farm family. He was born on April 22, 1851, in Cass County, the seventh of John H. and Harriett Reed Berry’s thirteen children. Descended from a Revolutionary War veteran, Wils Berry grew up near Adamsboro, Indiana. As a boy he was more interested in drawing and painting than any other profession or trade. At age twenty-one and encouraged by an older local artist, John Forgy, Berry submitted some drawings to the Beldon Atlas Company of Chicago. Hired as a sketch artist, Berry traveled for ten years over thirty states and into Canada, drawing and painting landscapes and pictures of farms and animals. Berry also drew the Parliament Buildings in Ottawa, a work that was later sent to the royal family, the same work that won him accolades from Queen Victoria.

Berry's mother died in 1872 and his father remarried in 1874. Wils Berry may have met his future wife at his father’s wedding. Her name was Emma Conner and she had good reason to be there, for her mother, Ellen Sackett Conner, was John Berry’s bride. Wils Berry and Emma Conner were married on January 30, 1878, in Cass County. The young couple took a stagecoach across an iced-over Lake Ontario for their honeymoon trip. By year’s end, they had a son, Murillo, born in Canada on December 9, 1878. In their travels, the Berry family lived in hotels and boarding houses. In 1880, they were in Luzerne, Pennsylvania. Nineteen hundred found them back in Indiana, on a Fulton County farm. Eventually they returned to their home county to the south and settled in Logansport.

In the mid 1890s, Wils Berry taught painting at Michael’s College (formerly Smithson College), located north of Logansport at the summit of College Hill. Nearly two decades before a flood destroyed his home, a fire burned the main college building on October 6, 1896, leaving a mere shell of blackened brick and Berry without a job. Berry’s daughter remembered the event: “My mother and I were shopping when that happened. She thought it might have been our house on fire when she saw the smoke. My father didn’t really lose anything in the fire, but the college was destroyed and they never rebuilt it.” (2) To make up for the lost employment, Berry began giving private art lessons to the young ladies of Logansport. It was not uncommon after that to see him and his students about town, painting en plein air. (3)

By 1910, Berry was living on Biddle’s Island with his family gathered around him. In addition to Berry’s wife Emma, there was their oldest child, Don Murillo, a painter in oil and watercolor. (4) Younger brother Willis wielded a brush as well, but he worked as a painter of houses instead of canvases. Virgil practiced law, while Inez taught kindergarten. (The remaining child, teacher, sketch artist, and painter Percy Berry, had died nearly a decade before.) The flood of 1913 may have brought their family idyll to an end. By 1920, the Berrys lived on Gate Street in Logansport, but only Willis remained at home.

A sometime farmer and collector of paintings and artifacts from pioneer days, Berry painted and sketched throughout his life. In addition to drawing and painting pictures of family farms, he created murals, painted curtains for opera houses, and decorated circus wagons in nearby Peru, winter home of the nation's circuses. Logansport Republicans carried his painting “Abe Lincoln the Rail-Splitter” in their parades and displayed it in their headquarters. Berry also created works for hotels in French Lick and Huntington. Today his work is in the collections of  the Cass County Historical Society and the La Porte County Historical Society Museum. Wilson Reed Berry died on April 28, 1928, and is buried at Mount Hope Cemetery in the county of his birth.

Notes
(1) “Judge Biddle of Biddle’s Island” by Richard B. Copeland, Logansport Pharos-Tribune, May 2, 2008.
(2) Quoted in an interview of Inez Berry Brunegraff (1890-1989) in the Logansport Pharos-Tribune, date unknown.
(3) Michael’s College was in operation from 1895 to 1896, hence Berry would not have taught there for long.
(4) Murillo Berry (1878-1965), also called Don or Don Murillo, was an artist like his father. Murillo’s full name may in fact have been Don Murillo Berry, perhaps after the Spanish Baroque painter Bartolome Esteban Murillo (1617-1682), or he may have assumed the name "Don" as an honorific.

Acknowledgements
I thank La Porte County Historian Fern Eddy Schultz for her extensive research on Wilson Reed Berry and his family and for her securing permission to publish Berry's painting below. Much of the information I used to write this article came from her. I also acknowledge the work of the Cass County Historical Society and Museum for their accounts of the razing of Michael's College and the flood of 1913.

Jim Deans, a reader of Indiana Illustrators, has kindly offered snapshots of Clotilde Embree from a family scrapbook. Clotilde was a friend of Jim's mother-in-law and other family members. These photographs, taken in about 1915 in Princeton, Indiana, show a glimpse of not just another time but another world. 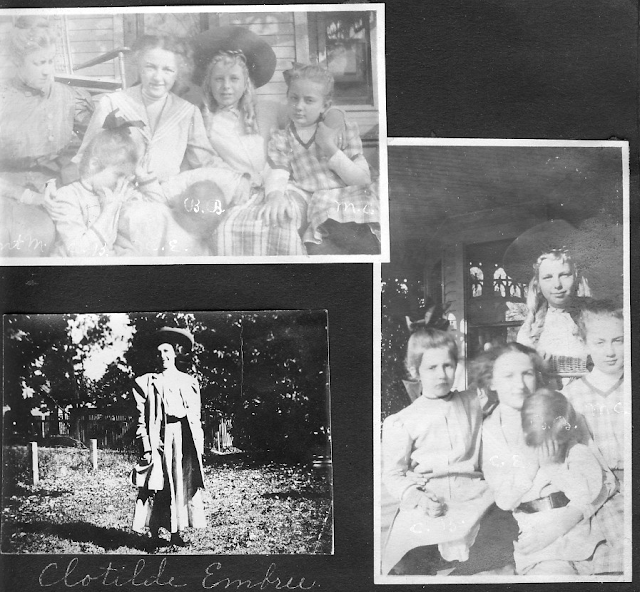