The illustrations of Walt Louderback are filled with an atmosphere of romance and drama. Like Dean Cornwell (1892-1960), Louderback worked for Cosmopolitan magazine during the early 1900s. The two men (who may have been friends) shared a painterly technique and a flair for mood, intrigue, and dramatic action in their pictures. That approach came to Louderback and Cornwell honestly, for Cornwell was a student of Harvey Dunn (1884-1952), who was in turn a student of Howard Pyle (1853-1911), the father of American illustration. Both Louderback and Cornwell would have studied illustration at a time when Pyle strode the earth like a giant.

Walter S. Louderback was born on February 3, 1887, in Valparaiso, Indiana, and--like Dean Cornwell--studied at the Art Institute of Chicago. He illustrated stories for Cosmopolitan, Good Housekeeping, Hearst's International, and other popular magazines. Many of those stories were also printed in hardbound editions with Louderback's illustrations. Readers of the 1910s and '20s would have been well acquainted with the art of Walt Louderback, as he illustrated books by one of the most popular authors of the day, James Oliver Curwood (1878-1927). In addition to being an artist, Louderback also taught at the Art Institute of Chicago. Robert Patterson (a student) and John Clymer (a boyhood admirer) were among the illustrators of a younger generation influenced by him. Today, Louderback is a much under-appreciated artist.

During the 1920s, Louderback lived in Europe and delivered his assignments to New York by surface vessel. He also experimented with modernist and Cubist painting. As war loomed, Louderback left Europe with his family in May 1939. He died at a sanitarium in Socorro, New Mexico, on October 15, 1941.

James Henry Cloetingh was born into a family of Dutch-Americans on July 3, 1894, in Muskegon, Michigan. As a young man he worked as the advertising manager for the Muskegon Chronicle. In his spare time he was secretary of the Muskegon Kennel Club. In 1923, in Muskegon's first championship dog show, Cloetingh's airedale, named Guardian Trust, took home the best of show honors.

By 1930, Cloetingh was living in South Bend, Indiana, and operating a commercial art studio with a partner. Their firm was called Cloetingh and De Man Studio. I don't know who his clients would have been--perhaps businesses in northern Indiana and the Chicago area. In addition to being a commercial artist, Cloetingh was a painter. I have found two of his pictures. Both are of boats. Cloetingh's subject should come as no surprise considering he was born on and lived close to Lake Michigan most of his life.

Cloetingh exhibited in the Hoosier Salon in 1961. He died four years later in June 1965 at the age of seventy. 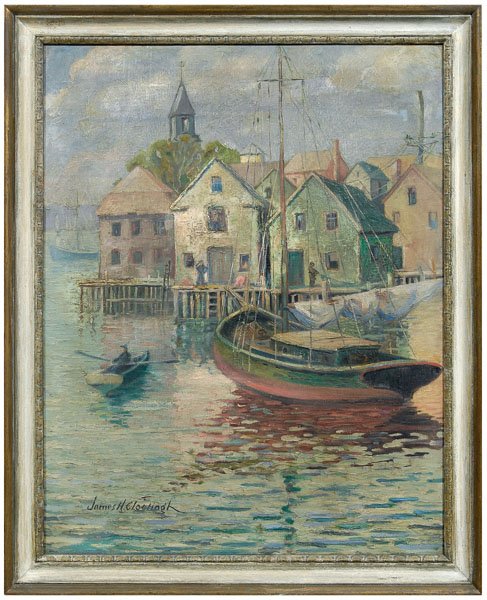