February is the month in which migratory ducks return to the Midwest--if they weren't already here in January--and one of the cutest and most fun to watch is the little bufflehead. Buffleheads are diving ducks, and where they dive is in our big rivers and lakes. First you'll see the bright white head of the male. Then you'll see him plunge, only to come up again somewhere close by. In its issue of January 1964, Outdoor Indiana had buffleheads on its cover in a portrait by Mac Heaton (1925-2002). If you're lucky and you look hard enough this late winter, maybe you'll see the real thing. 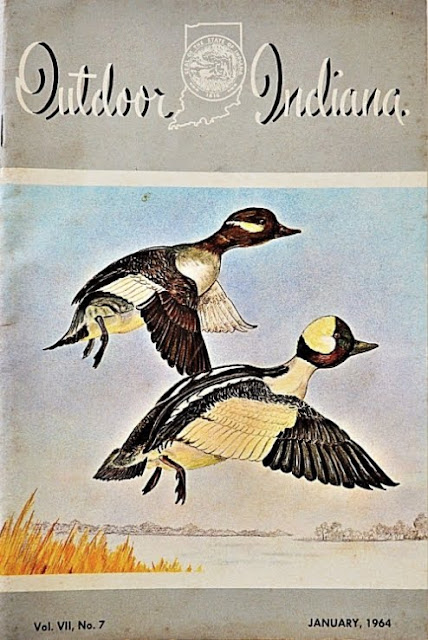 Today, February 12, 2019, is the 110th anniversary of the birth of Abraham Lincoln. He was born in Kentucky, but in the late fall of 1816, just a few weeks before Indiana became a state, he came with his family to the future land of Hoosiers. Abe spent fourteen years in Indiana before moving on to Illinois. That state may rightly claim the title of "the Land of Lincoln," but it was in Indiana that he grew up.

Outdoor Indiana, the magazine of the Indiana Department of Conservation, now the Department of Natural Resources, featured Abraham Lincoln in its issue of June 1963, one hundred years minus a month after the twin Union victories at Vicksburg and Gettysburg. The art on the front and back covers is from a design by Garo Z. Antreasian of Indianapolis. As you can see, the cover design is actually a photograph of a mosaic mural made from over 300,000 pieces of imported Murano glass, set by Ralph Peck and Mrs. Charles Pitts. It is located in the Indiana Government Center North, then called the Indiana State Office Building.

Garo Antreasian was born on February 16, 1922, in Indianapolis to parents who survived the Armenian Genocide of 1915. He attended Arsenal Technical High School, which was known for its programs in arts and graphics, and the Herron School of Art in Indianapolis. (1) During World War II, he served as a combat artist with the U.S. Coast Guard. Afterwards he taught at Herron before moving on the teaching jobs in Los Angeles and New Mexico. Mr. Antreasian retired in 1986 and died only recently, on November 3, 2018, eight days before Veterans Day. He was ninety-six years old. So today, in the month of their birthdays, we honor Abraham Lincoln, the Great Emancipator, but we may also honor another man of greatness who honored him.

Note
(1) Arsenal Technical High School, usually just shortened to "Tech," got its name from its use as an Civil War-era arsenal. The arsenal was closed in 1903. The school was opened in 1912. 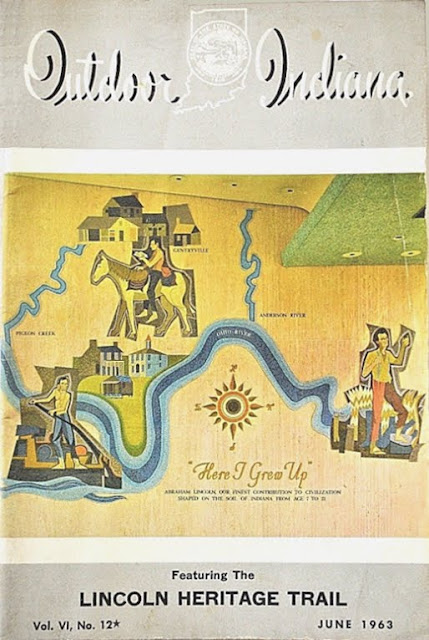 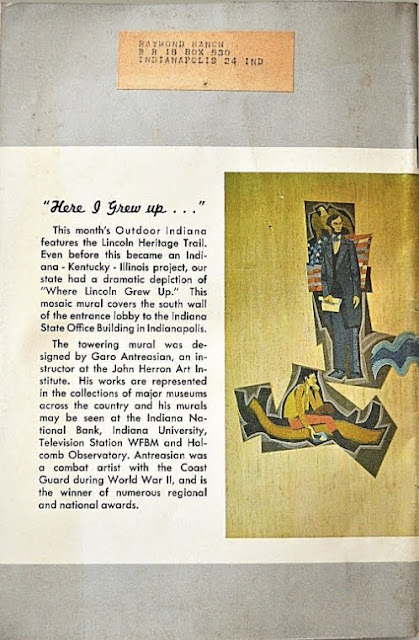