A Summertime Picture from Johnny Gruelle

Johnny Gruelle (1880-1938) was born in Arcola, Illinois, but he grew up in Indianapolis, just east of the downtown area and not far from the Lockerbie Square neighborhood where James Whitcomb Riley lived. Gruelle's father, the artist Richard Buckner Gruelle (1851-1914), was friends with Riley (1849-1916). Known as the Hoosier Poet, Riley was famed for his poems of childhood and life in small-town Indiana, including "Little Orphant Annie" and "The Raggedy Man." The poem "Little Orphant Annie" lent its name to Harold Gray's long-running comic strip, Little Orphan Annie. (Like Johnny Gruelle, Gray was born in Illinois but lived in Indiana. He graduated from Purdue University in 1917.) Some years before that, Johnny Gruelle and his family took inspiration from "The Raggedy Man" and named their famous dolls, Raggedy Ann and Raggedy Andy, after Riley's poem.

The Gruelle family didn't live far from downtown Indianapolis, yet their neighborhood was rural, or at most suburban in character. I suspect the Gruelle children would have gone berry-picking when they were young. It's that time of year now, when the black raspberries, then the blackberries, ripen and are ready to pick. Berry-picking is the subject of the following picture and poem, the picture by Gruelle, the poem by Ethel Fairmont (1881-1977), from her book Rhymes for Kindly Children (Wise-Parslow, 1937). You can read more about Ethel Fairmont at the website of Nancy S. Weyant, here.

Some of the illustrator's pictures for Ethel's book are a little too British, but that's okay, for Johnny Gruelle was all American and a Hoosier at that. I should point out that today, July 22, 2017, is the anniversary of the death of James Whitcomb Riley. He died one hundred and one years ago, in the centennial year of the state in which he was born. 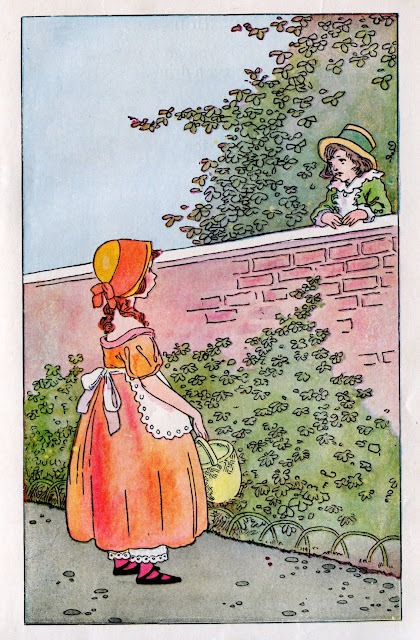 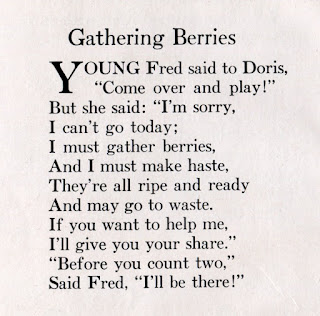