Cartoonist and commercial artist Thomas Wesley Floyd, Sr., was born on July 13, 1928,* in Gary, Indiana, to William Webster Floyd (1894-1936), a laborer in a steel mill, and Alice James Floyd (dates unknown), a housewife. Tom Floyd's parents came from the South, William from Wetumpka, Alabama, Alice from Mississippi. They were married on March 1, 1923, in Crown Point, Indiana.

Tom Floyd was their fourth child, but only three of those four showed up in the census of 1930, Tom, his older sister (Mary) Juanita, and his older brother James Frederick. All three were born in Indiana, and the family lived in Gary, the largest American city founded in the twentieth century and one known for its steel mills. In the census of 1940, Tom and his siblings were living in the household of their maternal grandparents, Walter and Ollie James. Walter James died in 1945.

Tom Floyd graduated from the University of Illinois in 1953 with a bachelor's degree in commercial art. He ran his own advertising business in Gary and worked as a designer of visual aids in the training department of Inland Steel Company, also in Gary. By 1971, he was vice president of W.V. Rouse & Associates of Chicago, a management consulting firm engaged in minority relations. Over the course of his career, Floyd also worked as an editorial cartoonist, single-panel cartoonist, comic strip artist, and comic book scriptwriter.

Race and minority relations were a continuing theme and interest in his life and work. He is best known for his cartoon collection Integration Is a Bitch! (1969), subtitled "An Assessment by a Black-White Collar Worker," but he also wrote and drew the cartoons for a second book, The Hook Book . . . The ABC's of Drug Abuse . . ., which he self-published in 1973 under his own firm, Tom Floyd Visuals of Gary, Indiana. It's a cute book on a serious and deadly subject. I stand with the late Mr. Floyd in his opposition to drugs and drug abuse, which has helped to ruin not just black people but all kinds of people in America and the world over. Integration Is  Bitch! won the Book of the Year Award from the National Conference of Christians and Jews in 1971.

In 2012, comics historian Allan Holtz published a monumental work, American Newspaper Comics: An Encyclopedic Reference Guide. In the index of authors and cartoonists, there is a single-name credit, "Floyd," for a person who created three comic features for the Chicago Defender during the 1960s. I don't think there can be any doubt that the artist in question was Tom Floyd. The three features credited to "Floyd" are:

I have a sample only of the first title (shown below). Comparing a sample of Integration Chuckles with the cartoons in Integration Is a Bitch! might be all the evidence we need to show that "Floyd" and Tom Floyd were the same person. (A comparison of signatures, also shown below, makes pretty good evidence, too.)
Beginning in the 1960s, Floyd was involved in a project for which every comic book fan, especially every Hoosier comic book fan, can shout Yay! The project was a comic book about a black superhero called Blackman, who flies by pulling on his own bootstraps and who likes to eat peanuts. (We should remember that Floyd's parents were both southerners.) Blackman finally made it into print in 1981 as a one-shot comic book pencilled by Eric O'Kelley and inked by Danny Loggins working from Floyd's script. It was published by Leader Comics Group, which is supposed to have been based in Indiana. I would like to think that that makes Eric O'Kelley and Danny Loggins Hoosier cartoonists, as well. By the way, Tom Floyd developed a supergroup that included Blackwoman, The Brotherhood, and The Big Dunker.
In the 1980s, Floyd drew editorial cartoons for the Gary Post-Tribune. One of his drawings was included in the 1984 edition of Best Editorial Cartoons of the Year, edited by Charles Brooks. (See below.) Tom Floyd married Wynona Marie Gibson, a native Illinoisan, on February 25, 1956, in Cook County, Illinois, presumably in Chicago. They had three children. Thomas W. Floyd, Sr., died on September 22, 2011, in Gary, Indiana. He was eighty-three years old.
*Although his year of birth is everywhere given as 1929, Tom Floyd's birth certificate states clearly that he was born in 1928. 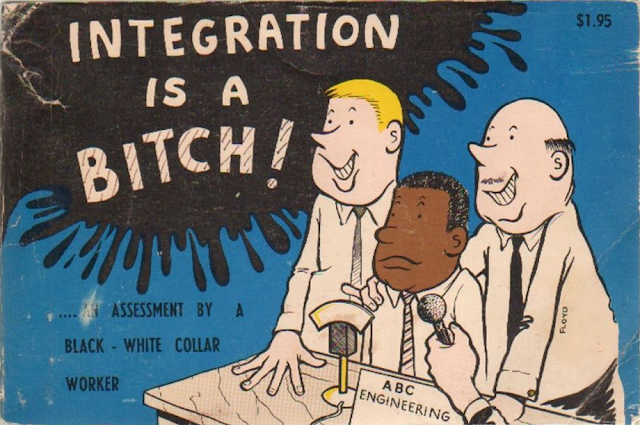 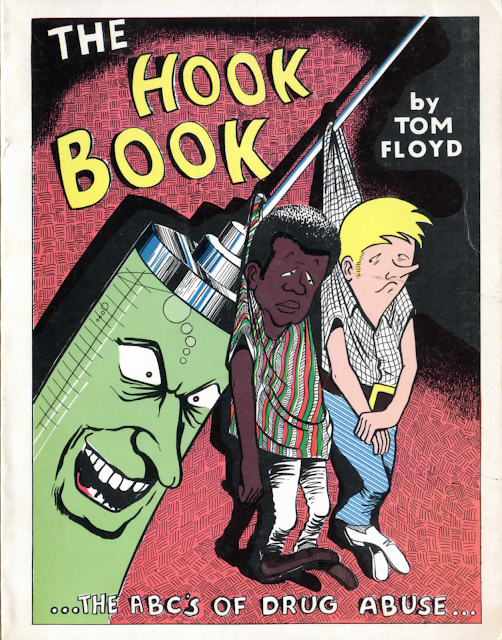