The 2012 Peru Amateur Circus and Circus City Festival are underway this week, July 14 through 21 in Peru, Indiana. To coincide with those events, I would like to write about an artist of the circus, Peru native Robert Weaver.

Robert Edward Weaver was born on November 15, 1913, in Peru, Indiana, winter home of America's circuses, now designated as the Circus Capital of the World and home of the International Circus Hall of Fame. Weaver earned his bachelor of fine arts degree in painting from the Herron School of Art in Indianapolis and studied fresco painting at the Skowhegan School of Painting and Sculpture in Maine. Although he traveled to Mexico and Europe, kept a studio in Greenwich Village, and served in the U.S. Navy during World War II, Weaver always returned to Peru and his role of promoting the circus and his hometown's unique place in the culture of the circus.

In addition to being a hometown booster, Weaver worked as a painter, muralist, sculptor, commercial artist, and illustrator. His work appeared in national magazines, including The Saturday Evening Post, Sports Illustrated, Good Housekeeping, Child Life, Children’s Playmate, and The Brownie Reader. He executed a number of murals in Indiana and at the Alameda Naval Air Station in California. He also exhibited his work in Washington D.C., Pittsburgh, at the Hoosier Salon, and at the San Francisco World's Fair. Weaver earned numerous awards and honors over his five-decade career. He also taught painting, mural design, drawing, and illustration at the Herron School of Art and served as chair of the Department of Illustration.

In 1960, Weaver led a revitalization campaign in Peru that included a downtown beautification project and the establishment of the Circus City Festival, Inc. (CCFI), an organization in which he served as president. The CCFI was instrumental in the foundation and promotion of the Peru Amateur Circus and the Circus City Festival, held each July in Peru. Weaver died on July 18, 1991, in New Bern, North Carolina. His work was subject of a segment of the television show Across Indiana in 1995. In 2010, the Indianapolis Symphony Orchestra debuted a concert piece by James Beckel, Jr., the slow movement of which was inspired by a 1952 painting by Robert Weaver entitled "Daniel (In the Lion's Den)." And of course this week, young performers will display their talents in the Peru Amateur Circus, the handiwork of Peru's circus painter, Robert Edward Weaver. 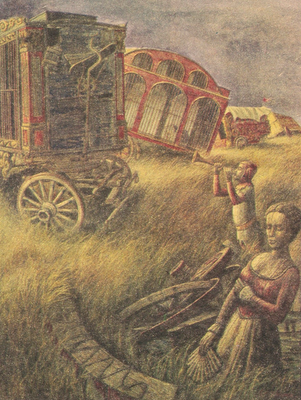 Roy Anderson Ketcham was born on November 11, 1894, in Sandborn, Indiana, and grew up in Indianapolis, where he delivered newspapers for the Indianapolis Star and attended Shortridge High School and the Herron School of Art. Ketcham furthered his art education in New York and at the Académie Julian in Paris. He returned to the United States feeling apathetic and suffering from tired eyes. Repairing to his parents' farm in Loogootee, Indiana, Ketcham spent the next five years behind a mule-drawn corn cultivator, mulling over his recent education and contemplating his future career. While on the farm, he took up painting again and got back into the game with studies at the Chicago Academy of Fine Art during the 1920s.

Described as "a strapping big blond--a good cross between an Apollo and a college football center," Ketcham painted landscapes and portraits, twice winning the Indianapolis Star prize for outstanding portrait at the Hoosier Salon. He lived and worked in Chicago for many years as an artist for the Chicago Sun-Times and an illustrator of children's books and magazines. His credits included illustrations (with Frank C. Papé) for the book The Child's Story of Science by fellow Hoosier Ramon "Uncle Ray" Coffman and for the magazine Junior Home.

Roy Anderson Ketcham died in November 1969 in Schoolcraft, Michigan. Unfortunately I don't have any pictures by Ketcham, but I have the following caricature of him by another Hoosier, Paul Plaschke. The image is from a blog called This Old Pallette.