Jon Joseph Laska, later John Laska, was born on November 25, 1918, in Portchester, New York. His parents, Isadore Laska and Marya Wojtanoska, were both Polish natives. John Laska's father died when he was five years old and he became a ward of the state. As a young man, John Laska studied at the Art Students League and the New American Artists School in New York. He was a student of Raphael Soyer (1899-1987). Laska served in the U.S. Army during World War II. His unit, the 104th Infantry Division, nicknamed the Timberwolves, fought in France, Belgium, and Germany and helped to liberate the Mittelbau-Dora concentration camp at Nordhausen. After the war, he earned a master of fine arts degree at the Art Institute of Chicago and entered a teaching career that would carry on for the rest of his working life. He taught art at University High School in Champaign, Illinois, for three years. From 1954 until his retirement in 1981, he taught at Indiana State Teachers College, now Indiana State University, and State High School or Laboratory High School in Terre Haute, Indiana. Laska died on April 21, 2009, at the age of ninety.

John Laska is an artist new to me. I found a reproduction of his painting Flood Scene, West Terre Haute in a book called Prize Winning Paintings, Representational and Abstract, published in 1962. The painting won an award at the Hoosier Salon in 1960. Judge Irving Shapiro (1927-1994) said of it:

In regard to Mr. John Laska's prize-winning painting in the 1960 Hoosier Salon show, it not only was the finest work in the show, but it is one of the finest oils that I have ever had the good fortune to pass judgment on. I was particularly impressed with the strength and vigor with which it was handled. [. . .] The power, simplicity and honesty of statement with which it was presented made "Flood Scene, West Terre Haute" a painting I will certainly remember for a long time to come.

Another judge, Paul Strisik (1918-1998), remarked: "This painting conveyed a tense dramatic situation very successfully without falling into mere illustration." I don't think we should take that as a swipe at the field of illustration but rather as an attempt to lay down a line between illustration and fine art. The artist himself wrote: "The flood scene is a descriptive kind of work. I do not always paint this way. Most of my more recent production might well be classified as more abstract."

Laska was something of an activist. He was a charter member of the Eugene V. Debs Foundation and the designer of the Eugene V. Debs Award, a large plaque that has been handed out every year but two since 1965. (Hoosier author Kurt Vonnegut, Jr. [1922-2007] won the award in 1981.) Laska's art also adorns the interior walls of the Eugene V. Debs Home in Terre Haute. I won't show any of that art here, as it depicts some of the hateful figures and symbols of a hateful and murderous system responsible for the deaths of countless millions of people, including compatriots of Laska's parents. Instead I will just show his painting, which is, I think, remarkable for its almost abstract handling and composition of a scene that might otherwise be considered a genre painting. 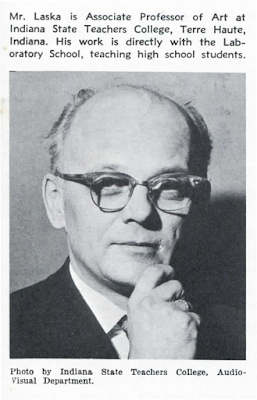