Like Charles Schulz of Peanuts fame, Paul McCarthy was the son of a barber. He was born on January 26, 1910, probably in Crawfordsville, Indiana, and graduated from Crawfordsville High School in 1928. By being born in the right place at the right time, McCarthy fell into the "Sugar Crick School," a group of cartoonists that included Allen Saunders, Bill Holman, Frank Beaven, Dave Gerard, Bandel Linn (a classmate of McCarthy), and, later, Tom Henderson. Nappanee, Indiana, lays claim to having the most cartoonists per capita of any city in the United States. Crawfordsville might give Nappanee a run for its money.

Paul McCarthy began his career as a commercial artist in Louisville, Kentucky, and Danville, Illinois. Moving to Toledo, Ohio, he joined Allen Saunders and Elmer Woggon on the staff of their syndicated comic strip Big Chief Wahoo, later just Chief Wahoo. Though politically incorrect by today’s standards, Chief Wahoo was a popular strip in its day. In order to house a growing staff of assistants and ghosts, Saunders and Woggon "rented a suite of offices in a decrepit building across the street from the [Toledo] News-Bee." (1) Among the junior artists there were Elmer’s brother Bill Woggan, later of Katy Keene comic books, and Don Dean, later of the newspaper strip Cranberry Boggs.

Paul McCarthy didn't stay long in Toledo. Nineteen forty found him in New York City, working in the publicity department of Paramount Pictures. He also drew magazine gag cartoons and his own syndicated comic strip. It was called Gertie O’Grady and it made its debut on the same day--June 30, 1940--and in the same venue--the Chicago Tribune Comic Book Magazine--as Dale Messick’s Brenda Starr Reporter. The main characters in McCarthy's Sunday strip are plump, Irish Gertie O'Grady, mad genius Professor Bunson Burner, and Apercott, Professor Burner's gorilla. Although it appeared in big-market newspapers such as the Los Angeles Times and the Chicago Tribune, Gertie O’Grady was short-lived and came to an end on November 14, 1943.

During World War II, McCarthy drew educational comics and cartoons for the war effort. He continued doing commercial and advertising work after the war. In 1950, McCarthy went to work for Harvey Comics, drawing such features as "Holly of Hollywood," "Fun at the Zoo," and "Sad Sack." He is supposed to have worked at Harvey from 1950 to 1963 as a writer, penciler, and inker. Harvey Comics historian Mark Arnold called his work "pristine," and a look at the two-page story below shows as much. (2) We need cartoonists like Paul McCarthy again.

In 1959, Paul McCarthy lived in Somerville, New Jersey. He is said to have died an untimely death in the early 1960s. However, what happened to Paul Joseph McCarthy remains a mystery. I would like for it no longer to be a mystery, and I hope someone can help put an end to it. His obituary states that Paul McCarthy lived in Milford, New Jersey, for the thirty-five years preceding his death. He may have been the same Paul McCarthy who taught art in elementary school in the area during the 1960s and '70s. In any case, Paul J. McCarthy died on July 11, 1991, at Hunterdon Convalescent Center in Raritan Township. He was eighty-one years old. His wife, Blanche Horton McCarthy, preceded him in death in March of the same year. And so at last we have a solution to the problem of the missing cartoonist. I wish we could have him back.

Notes
(1) "Playwright for Paper Actors: The Autobiography of Allen Saunders, Chapter 9: The Foot in the Door Wore a Moccasin" by Allen Saunders in Nemo: The Classic Comics Library, Oct. 1984, pp. 48-50.
(2) "A Family Affair: The Harvey Comics Story" by Mark Arnold in Comic Book Artist, June 2002, pp. 18-38.
You can read more about Paul McCarthy in Allan Holtz's blog, Stripper's Guide, here. 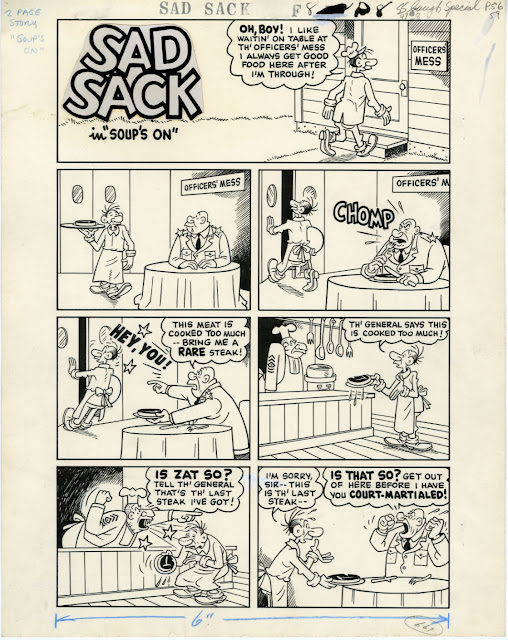 Revised and updated, January 30, 2020. Thanks to James Stout (his comment appears under my article "Allen Saunders and Chief Wahoo," here) for the information that has led me to finding Paul McCarthy's date and place of death.
Text and captions copyright 2015, 2020 Terence E. Hanley
Posted by Terence E. Hanley at 6:00 AM 3 comments:

The World Series begins a week from today, on October 27, 2015. Time was when the Fall Classic would be ending about now. These days it goes on into November unless one team knocks out the other in four games straight. Even if that happens, the baseball season will overlap week eight of the NFL season, which begins on October 29. So there are overlapping seasons in our two biggest sports. There are also overlapping controversies. The controversy over the Washington Redskins' name is the bigger of the two. That's understandable, as the name is troubling to many people. But there is a controversy in baseball, too, and it involves not the name of a team but its logo and mascot. The team is the Cleveland Indians, and the logo and mascot together are called Chief Wahoo. Thereby hangs a tale.

John Allen Saunders was born on March 24, 1899, in Lebanon, a town located in Boone County, northwest of Indianapolis. He graduated from, then taught at Wabash College in Crawfordsville, Indiana. In 1927, he moved to Toledo, Ohio, to become a journalist. Saunders was a cartoonist himself, but his real talent was as a writer. In the 1930s, he began working with a stable of cartoonists in Toledo. Eventually his collaborators would include Elmer Woggan (1898-1978) on Big Chief Wahoo, Ken Ernst (1918-1985) on Mary Worth, William Overgard (1926-1990) on Steve Roper and Mike Nomad, and Alfred Andriola (1912-1983) on Kerry Drake. He also advised Nick Dallis (1911-1991), co-creator of Rex Morgan, M.D., Judge Parker, and Apartment 3-G. If there was any one person responsible for the creation of the soap opera comic strip, it was probably Allen Saunders.

In an article called "Changing World of the Comic Page," co-written with Elmer Woggan and published in The Federal Illustrator in Summer 1941, Saunders went into the origins of the comic strip Chief Wahoo. Rather than quote it at length, I'll just show it in its entirety below. 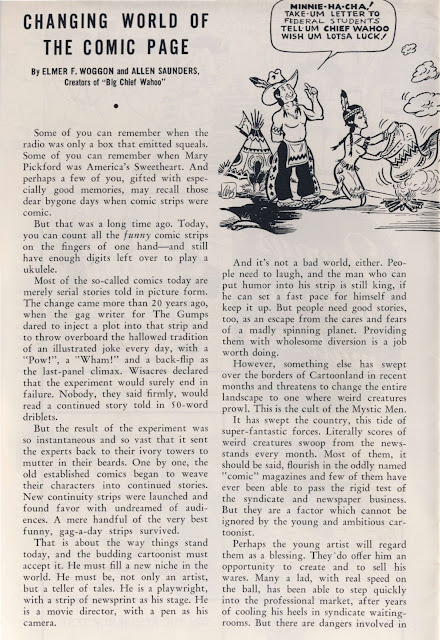 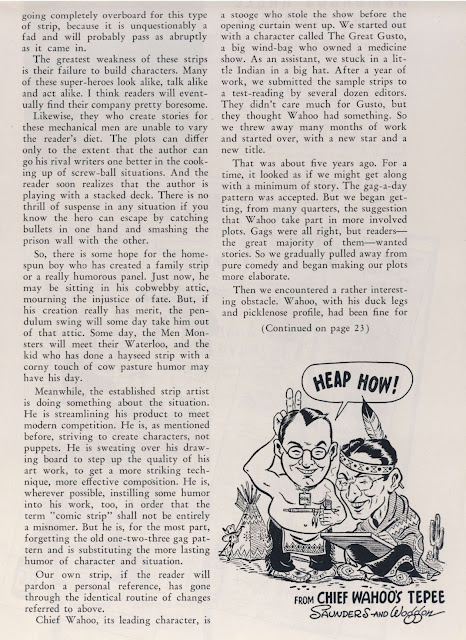 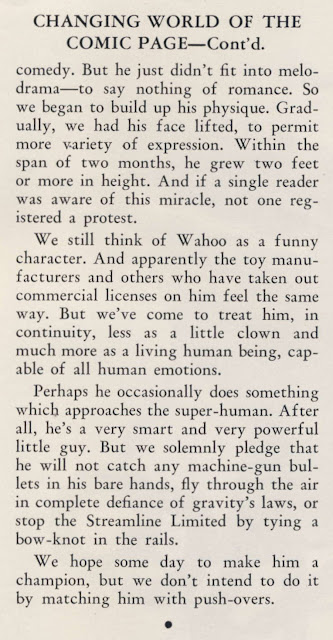 The Cleveland Indians baseball club was founded in the misty dawn days of the American League and gained its current name in 1915, making this year the team's centennial. (This centennial season didn't turn out very well for the Indians. With a record barely above .500, they finished in the middle of their division.) The logo and mascot of the team are a good deal younger than one hundred years. According to an article called "The Secret History of Chief Wahoo" by Brad Ricca, dated June 19, 2014, the character that became the current logo and mascot first appeared on the front page of the Cleveland Plain Dealer on May 3, 1932. Drawn by Cleveland cartoonist Fred George Leinert (1895-1974), the Plain Dealer's "Little Indian" became wildly popular among fans. The Indian logo didn't become official until 1947 when owner Bill Veeck hired the J.F. Novak Company to come up with something that "would convey a spirit of pure joy and unbridled enthusiasm" in regards to his team. (1, 2) The job of designing the logo fell on seventeen-year-old Walter Goldbach. Through various modifications, the image he created has come down to us as the character we now call Chief Wahoo. However, Mr. Goldbach's new Cleveland Indian wasn't called Chief Wahoo until 1950 or so. There are various theories as to how he acquired that moniker. It could have come from an old cheer. The simplest explanation might be that Cleveland fans took the name right out of the comics page, in which case Allen Saunders, a native of the land of Indians, provided it, though in an indirect way. Whether that's something to be proud of or ashamed of, I can't say.

The controversy and the cartoonist connection continue. An article called "Cartoon Predicted Encounter Between Indians Fan and Chief Wahoo Protester" by Mike Oz (Yahoo Sports, Apr. 7, 2014) shows a photographic image of a Cleveland Indians fan in full regalia facing Robert Roche, executive director of the American Indian Education Center in Parma, Ohio, on opening day in Cleveland. Below that is a cartoon of the same situation, drawn by Lalo Alcaraz twelve years before. The juxtaposition of these two images--the photograph and the cartoon--is a good example of how the cartoonist functions as a canary in the coal mine of society.

Notes
(1) Quoted in "The Curse of Chief Wahoo" by Peter Pattakos from the website Scene, April 25, 2012, here.
(2) Also in 1947, Veeck hired Larry Doby for his club. Doby was the first black player in the American League.

A Cartoon for Harvest Time