Author, illustrator, poster artist, and painter Alice Woods was born in Goshen, Indiana, on November 22, 1871. She attended the Girls Classical School of Indianapolis, the Indiana School of Art under William Forsyth and T.C. Steele, and the Shinnecock Summer School of Art under William Merritt Chase. She continued her art education at the Art Students League, the New York School of Art, and the Académie Colarossi in Paris. Her experiences as an art student in Paris gave her the material she needed for a novel, Fame Seekers, published in 1912.

Alice spent almost two decades in Paris and knew Gertrude Stein, Ezra Pound, Margaret Cravens, and other members of the American art community. She married the painter Eugene Paul Ullman (1877-1953), another Chase student and a near lifelong expatriate. Together they had two sons, sculptor Allen Ullman and painter/illustrator Paul Ullman. After separating from her husband in 1914, Alice Woods Ullman returned to the United States and was associated with the artistic crowd in Provincetown, Massachusetts, and Greenwich Village, New York.

Alice Woods wrote and illustrated stories for The Century, McClure’s, Pearson’s, The Smart Set, and other magazines. She also wrote six novels: Edges (1902), A Gingham Rose (1904),  Fame Seekers (1912), The Thicket (1913), The Hairpin Duchess (1924), and The Gilded Caravan (1927). In the Fame Seekers, Alice wrote: "Modern life has produced nothing more interesting, more charming or more alarming than the American girl," a sure indication of her interest in women’s stories and women’s themes. Perhaps she offered a commentary on her own marriage when she wrote that if the American girl, studying in Paris, ends "by marrying, [then] heaven help the man, for it is with the secret gnawing of compromise or condescension."

Alice Woods Ullman was a member of the National Association of Women Painters and Sculptors, the National Arts Club, the Woman’s Art Club of New York, and the Portfolio Club of Indianapolis. She died on July 24, 1959, in New York City.

Dale Van Pelt must have had an interesting career, yet I have found out only a little about him. He was born in about 1872 in Vevay, the seat of Switzerland County, Indiana. His birth may have coincided pretty closely with the publication of Vevay native Edward Eggleston's popular novel The Hoosier Schoolmaster: A Story of Backwoods Life in Indiana (1871), a fictional recounting of a real-life schoolteacher's experiences in neighboring Jefferson County. Eggleston's novel may offer a glimpse into what the young life of Dale Van Pelt must have been like.

In 1880, Van Pelt was enumerated in Pleasant Township in Switzerland County with his father (a physician), his mother, and other members of the family. Strangely enough, Calvin Bear, my distant relative, was listed on the same page of the census book. Before the decade was out (probably in 1888), Van Pelt set off for Purdue University. Located on the edge of the prairie, Purdue would have been a far cry from the river hills of southern Indiana. Van Pelt thrived there, however. Class historian, football quarterback, president of the Emersonian Society, and art editor of the Debris (the class yearbook founded a few years earlier by John T. McCutcheon), Van Pelt must have been a big man on campus. Upon graduating in 1892 with a degree in mechanics, he went to work as an artist with the Indianapolis Sentinel. Incidentally, Van Pelt's classmates included the poet Charles Cottingham and John S. Wright. I'd like to quote from the website of the John S. Wright Center at Purdue University for more on him:

The Center is named in honor of John Shepard Wright, a member of the Purdue University class of 1892 who, in 1964, provided the Department of Forestry and Natural Resources with a generous endowment for the promotion of forestry in Indiana. Mr. Wright was a botanist, an Eli Lilly executive, and a friend of many forestry leaders in Indiana, particularly Stanley Coulter, Purdue University Professor Daniel DenUyl, and Charles C. Deam, the first state forester of Indiana.

Purdue also holds some of Van Pelt's papers, a diary with sketches from a Purdue botany class. I suspect Wright and Van Pelt studied botany together, probably under Stanley Coulter (1853-1943). They may even have been friends.

The period in Dale Van Pelt's life between 1893 (when he was working for the Indianapolis Sentinel) and 1910 (when he was enumerated in the federal census) is a mystery to me. In 1902, he married Minnie M. Wherritt of Shelbyville, Indiana. In 1910, 1920, and 1930, the census taker found him living in Chicago and working as a commercial artist, illustrator, and engraver. During his Chicago years, Van Pelt shared a household with Winnie and their children, as well as with other members of their extended family.

Dale Van Pelt would have been about fifty-eight years old in 1930. He could easily have lived for a couple of more decades. But I'm afraid I don't know his fate. His drawings are probably hidden away in old bound volumes of newspapers or on reels of scratchy microfilm. A quick search might turn something up. For now, we'll have to be satisfied with an image from the Purdue Debris from over a century ago, not by him, but of him. The picture below is of the Emersonian Quartet, a vocal group with (left to right) Enos Shaw, high soprano; Dale Van Pelt, low bass (hence his proximity to the floor); Harry Scudder, fine tenor; and Charles Gough, big alto. The artist is unknown. The year was 1889. 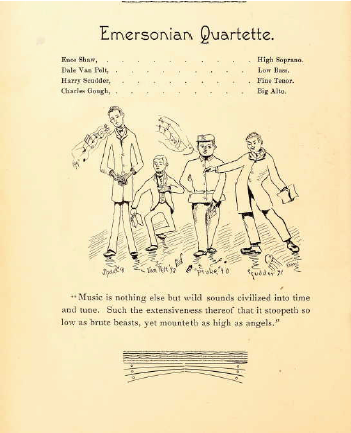 John Hugh O'Donnell, better known to readers of the Indianapolis News as J. Hugh O'Donnell, was born on November 20, 1899, in Indianapolis. He won a scholarship to the Herron School of Art in 1916-1917, studying under Otto Stark, T.C. Steele, and William Forsyth. At Arsenal Technical High School, O'Donnell took evening classes from Elmer Tafflinger and subscribed to C.N. Landon's correspondence course in cartooning. The young artists's earliest cartooning credits may have been for The Arsenal Cannon, his school yearbook.

O'Donnell went right to work out of high school, taking a job at the front counter of the Indianapolis News in 1919. He moved up two notches in pretty short order, first to illustrator in the advertising department, then to staff artist in the editorial department, where he rubbed elbows with Kin Hubbard, Charles Kuhn, and Gaar Williams. O'Donnell worked as a staff artist from 1923 until being drafted in 1942. He served in a military police battalion and illustrated Leo M. Litz's Report from the Pacific, published in 1946. O'Donnell switched to the Indianapolis Times after a big shakeup at the Star-News in 1948. He retired from the Times in 1955.

J. Hugh O'Donnell illustrated Hoosier poet Bill Herschell's versifying for the Indianapolis News. He also created "Lucky Dollar," a character for a Red Cross television program. Named a Sagamore of the Wabash and a Kentucky Colonel in the same year, O'Donnell won a Freedom Foundations Award in 1952 and a Lincoln National Life Foundation Award in 1951. John Hugh O'Donnell died on December 30, 1977, and was buried at Holy Cross Cemetery in Indianapolis.