This month marks the 136th anniversary of the Battle of Little Bighorn, or as the victors called it, the Battle of the Greasy Grass. On June 25, 1876, a sizable force of American Indians camped near the Little Bighorn River in eastern Montana met and crushed the United States Seventh Cavalry under George Armstrong Custer, killing him and 267 of his officers, men, and scouts. The popular image of the battle at Little Bighorn comes from a lithograph made by the German-American artist F. Otto Becker (1854-1945) and mass produced in 1896 by the Anheuser-Busch Company of St. Louis, Missouri. Becker's image, entitled "Custer's Last Fight," is justifiably famous. Lost and almost forgotten today is the work that preceded and inspired it. Also called "Custer's Last Fight," it was painted by Cassilly Adams, an Ohio artist laid to rest in an Indiana cemetery.

Cassilly Adams was born on July 18, 1843, in Zanesville, Ohio. His father was a Massachusetts-born lawyer, descended from President John Adams. As a young man, Cassilly Adams served in the United States Navy during the Civil War, first as a Master's Mate, then as an Acting Ensign in the Mississippi Squadron, aboard the U.S.S. Osage. He studied at the Boston Academy of Art and the Cincinnati Art School and made his living as a landscape artist, designer, and engraver. By 1880, Adams was living in St. Louis. In 1884-1885, he painted a monumental canvas--16 1/2 feet by 9 1/2 feet--depicting the Battle of Little Bighorn. (There were also two end panels depicting Custer as a small boy and in death.) The idea was for the painting to be a traveling exhibition and subject of a lecture for paying customers. That venture fell through, and the painting went to a St. Louis saloonkeeper, and, upon his death, to the Anheuser-Busch Company. Otto Becker was brought in to turn Adams' painting into a popular lithograph. In his book One for a Man, Two for a Horse, author Gerald Carson called Adams' work "the most popular exemplar of American saloon art." It was also used to sell patent medicine. Unfortunately, Cassilly Adams' original painting, "Custer's Last Fight," is no longer with us. Anheuser-Busch presented it to the Seventh Cavalry, which proceeded to lose it despite its immense size. The painting was rediscovered, lost again, found again, restored during the Great Depression, and finally put on display at the officer's club at Fort Bliss, Texas. On June 13, 1946, almost seventy years to the day after the Battle of Little Bighorn, the painting was destroyed by fire.

Little is known otherwise of Cassilly Adams. He worked in Cincinnati and Toledo as a designer and engraver and painted numerous scenes of Indian life. The 1920 census found him in Marion County, Indiana. At age seventy-seven, he was occupied as a farmer. He died the following year, on May 8, 1921, in Traders Point and--like Custer and his men--sought the high ground, for Cassilly Adams now lies buried at Crown Hill Cemetery, located at the highest point in Indianapolis.


Postscript (Feb. 5, 2015): Author Myron J. Smith, Jr., has cited this article in his new book, Civil War Biographies from the Western Waters: 956 Confederate and Union Naval and Military Personnel, Contractors, Politicians, Officials, Steamboat Pilots, and Others (Jefferson, NC: McFarland and Company, 2015). Mr. Smith has given an interesting account of Cassilly Adams' military career during the Civil War. You can see a preview of Mr. Smith's book on Google Books.

At one time, Indianapolis was a leader in the arts. During the late 1800s and early 1900s, prominent Indianapolitans banded together to establish the Art Association of Indianapolis, the Society of Western Artists, the Indiana Artists Club, and other art institutions. In 1893, Modern Art, a magazine of the arts and crafts movement and the first of its kind, began publication in Indianapolis. During that same decade, the second Indiana School of Art, under William Forsyth, operated out of studios in downtown Indianapolis. Although that school closed its doors in 1897, its successor, the Herron School of Art, opened in 1902 and is still in existence as part of Indiana University-Purdue University at Indianapolis. One of the most significant developments in Indiana art of the 1890s was the arrival of the Hoosier School, composed of William Forsyth, Otto Stark, T.C. Steele, J. Ottis Adams, and Richard B. Gruelle. Less well known is that during the 1890s, Indianapolis newspapers took advantage of recent technological developments to begin printing cartoons and illustrations in greater numbers. In that first decade of more advanced and reliable reproduction of artwork, newspapers in Indianapolis hired men who would make their names known in the world of book design, illustration, cartooning, and other graphic arts. They included Frederick Coffay Yohn, Arthur Sinclair Covey, Bruce Rogers, Kin Hubbard (Abe Martin), Johnny Gruelle (Raggedy Ann), and Sidney Smith (The Gumps).

If newspapers and magazines were to fill their pages with illustrations, they would need well trained illustrators, and lots of them. Schools of art flourished in late nineteenth century America, but their instruction was concentrated in the fine arts. Commercial art held a place far down on the list of worthy artistic endeavors. I have found references to a school of illustration operating in Indianapolis in the 1890s or early 1900s. There may have been more than one in fact. But there isn't any mention of such a school in The Encyclopedia of Indianapolis or other sources I have checked. Then I found two advertisements for the National School of Illustrating: 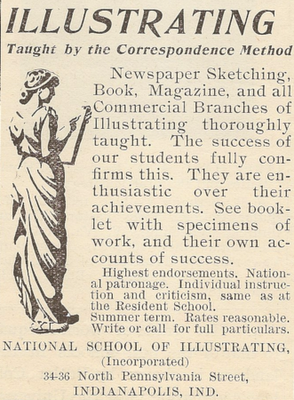 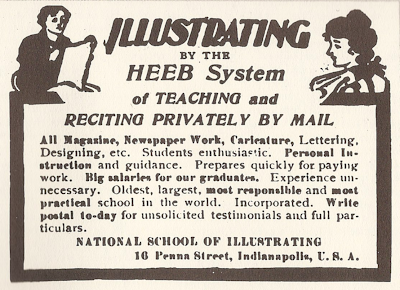 The first advertisement is from 1900, the second from an unknown date, but perhaps about 1902. The Butler University yearbook of 1899 refers to the National Illustrating Company as "the oldest, largest and leading engraving house in the state." A directory of Indianapolis from about the same time lists the institution as a company of engravers, electrotypers, designers, and artists. A man named Carl Anderson was listed as director of the school. Carl Anderson was also the name of the cartoonist who drew the pantomime comic strip Henry, but I don't see how the chronology of his life would have placed the cartoonist Carl Anderson in Indianapolis in the early 1900s. I hope someone can tell me differently because I would like to add Anderson's name to my list of Hoosier cartoonists.

The "Heeb System" was named for Emmett Jerome Heeb, also known as E.J. Heeb. Born on June 11, 1858, in Fayette County, Indiana, Heeb was an educator, publisher, auctioneer, and businessman. At one time or another he was affiliated with the Indianapolis College of Law and the National Correspondence Schools. The National Correspondence Schools had their offices in the When Building, located at 28 to 40 North Pennsylvania Street in Indianapolis (1), an address inclusive of the addresses shown in the first advertisement above. Coincidentally or not, the When Building was the work of John Tomlinson Brush, a prominent businessman and himself an artist. The 1906 directory of Indianapolis informs us that Heeb founded the Indianapolis Business University in 1850, an impossibility given his year of birth. In any case, the school offered instruction and training in every kind of business, including not only illustration and cartooning, but also bookkeeping, stenography, telegraphy, banking, law, pharmacy, writing, and advertising.

Heeb died in Los Angeles on March 29, 1950. I don't know what happened to his National School of Illustrating. I'd like to find out more about the school and its students. Some studied by correspondence, some in residence. Cartoonist Nate Collier (1883-1961) did both. William F. Heitman (1878-1945) may have been with the school as well. The name Indiana Illustrating Company, cited in articles about Heitman, may simply have been misremembered long after the school had given up the ghost.