In observance of National Women's History Month, Indiana Illustrators presents an entry on a woman who not only illustrated books on history, but also lived a fair bit of it herself during her near century on earth.

Clotilde Embree Funk was born on June 25, 1893, in Princeton, Indiana, to a pioneer family of Huguenot origin. After attending local schools in Princeton, she set off for the Tudor School and the Herron School of Art in Indianapolis, where she studied from 1911 to 1913. Her art career began in earnest when she moved to New York City in 1917 to live with her older sister Louise. Clotilde studied at the Cooper Union Art School (1917-1920) and worked as a freelance commercial artist, while Louise labored away as a fifteen-dollar-a-week fashion editor.

The two advanced their careers over the next decade, and by the early 1930s, change was in the works for both. Louise Embree wrote a biography of George Washington and submitted it to a New York publisher, accompanied by younger sister Clotilde’s sketches. In rapid order, Clotilde Embree married Claude Douglas Funk (a man she had known since third grade) while on vacation in her hometown of Princeton, the book was accepted, and Clotilde spent her honeymoon working on her illustrations. In 1931, she settled in Indianapolis to raise a family, and the following year, A Child’s Life of George Washington by Louise Embree came out. Clotilde Embree was off on a new career.

Over the next three decades, Clotilde illustrated more than sixty children’s books. She drew the pictures for some of the first in the “Childhood of Famous Americans” series published by the Bobbs-Merrill Company of Indianapolis. The illustrations for biographies of George Washington, Abraham Lincoln, Thomas Jefferson, Robert E. Lee, and George Washington Carver (all by Augusta Stevenson) and Stephen Foster (by Helen Higgins) were hers. Clotilde’s other books included Cecilia’s Locket and her own favorite, To See the Queen (1954).

An injury to her wrist forced Clotilde to give up illustration in favor of painting in 1962. She studied under Martha Slaymaker, whom she called “the biggest influence on my later work.” Thereafter, she exhibited in Indianapolis and elsewhere and won several prizes for her work.

Clotilde Embree Funk died at age ninety-eight on November 10, 1991, in Noblesville, Indiana. She was a small woman with a great talent, and she loved children and drawing children.

The most recent issue of Traces of Indiana and Midwestern History (Winter 2011), the magazine of the Indiana Historical Society, features an article about Adolph G. Metzner, a German-born artist who served on the side of the Union during the Civil War. The cover and most of the contents of this issue commemorate the sesquicentennial of Indiana's involvement in the Civil War.

Born in 1834, Metzner enlisted in Indianapolis in 1861 and served in Kentucky, Tennessee, and Georgia. Along the way, he drew and painted pictures of what he witnessed. Traces displays several pieces of artwork in full color, from a burlesque camp scene to one of the most gruesome images I have ever seen published in an American magazine. The images are drawn from the same sources used in the publication of a book called Blood Shed in This War: Civil War Illustrations by Captain Adolph Metzner, 32nd Indiana by the author of the article in Traces, Michael A. Peake.

Metzner returned to Indianapolis after the war and worked as a pharmacist. He later gave up pharmacy for research and industry in the field of ceramics. He died in New Jersey in 1918 but is buried at Crown Hill Cemetery in Indianapolis.

The name of the article, by the way, is "Adolph G. Metzner: Entrepreneur, Soldier, and Artist." And rather than steal any thunder from the book, the magazine, the article, or the author, I will simply refer you to them, each one as you like.

Email ThisBlogThis!Share to TwitterShare to FacebookShare to Pinterest
Labels: The Civil War

Today, March 8, 2011, is International Women's Day, and the centennial year of the first International Women's Day. This year is also the centennial year for the publication of a book called The Dutch Twins by Indiana author and illustrator Lucy Fitch Perkins. Although Lucy Fitch Perkins had previously written and illustrated two books, The Dutch Twins was her first based on a pair of ideas which had recently impressed the author. In her words:

One was the necessity for mutual respect and understanding between people of different nationalities if we are ever to live in peace. . . . The other . . . that a really big theme can be comprehended by children if it is presented in a way that holds their interest and engages their sympathies.

The Dutch Twins was the first in a series that eventually totaled twenty-seven titles, from The Cave Twins (1916), to The Spartan Twins (1918), to books about twins from Ireland, Mexico, Switzerland, France, the Philippines, Italy, and many other nations and periods of history. I think a remembrance of Lucy Fitch Perkins and her work is just right for today's occasion.

Lucy Adeline Fitch Perkins, descended from passengers of the Mayflower, was born on July 12, 1865, in the little town of Maples, Indiana. Her formal instruction in art came at the School of Boston Museum of Fine Arts from 1884 to 1888 under Robert Vannoh, Otto Grundman, and Frederic Crowninshield. After a year of work for the Prang Educational Company, Fitch moved to Brooklyn, where she taught art at the newly established Pratt Institute. At the end of “four happy winters teaching and studying” (1887-1891), Fitch married architect Dwight Heald Perkins (1867-1941), whom she had met in Boston. The newly wed couple returned to the Midwest, to Evanston, Illinois, where she spent most of the rest of her life and where she bore two children.

Lucy Fitch Perkins was a prolific author and illustrator of children’s books. During her forty-year career, she wrote and illustrated nearly four dozen books. Her first book (illustrations only) was Fairy Starlight and the Dolls, published in 1896. The Goose Girl: A Mother’s Lap Book of Rhymes and Pictures (1906) and A Book of Joys: The Story of a New England Summer (1907) were her own, words and pictures all. In 1911, she hit on a winning formula with The Dutch Twins. Nearly every year for the rest of her life, Lucy Fitch Perkins wrote and illustrated a new book, mostly about twins. In 1935, her two-millionth copy rolled off the printing press, a testament to the sureness of her vision of three decades before. The last twins book, The Dutch Twins and Little Brother (1938), was published posthumously, for Lucy Fitch Perkins died on March 18, 1937, in Pasadena, California.

In the following pictures, you can see the artist's fine handling of the human form and of design and color. There is of course an art nouveau influence. Some of these pictures are also quite like the poster designs of the day. In any case, you will see that Lucy Fitch Perkins, like so many women artists, then and now, drew and painted women and children with real delicacy, warmth, and affection. The last image may not be quite right for today's observance, but I couldn't pass up the chance to show it, as striking and dramatic as it is. 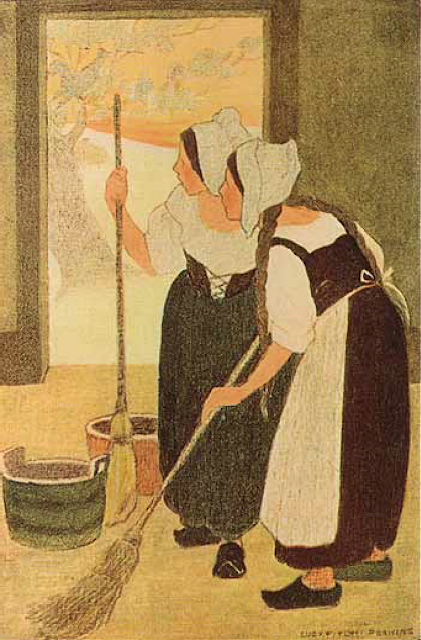 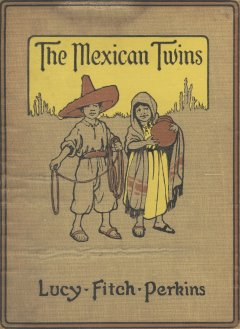 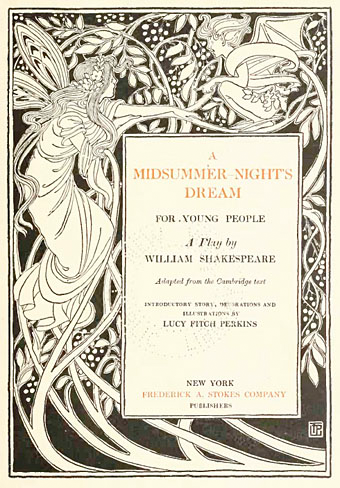 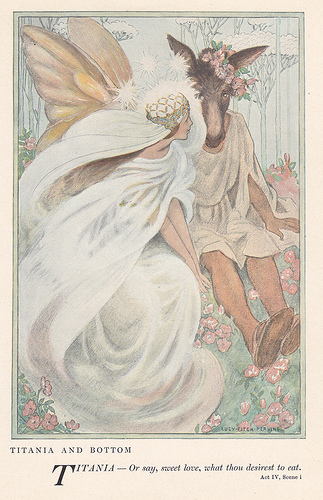 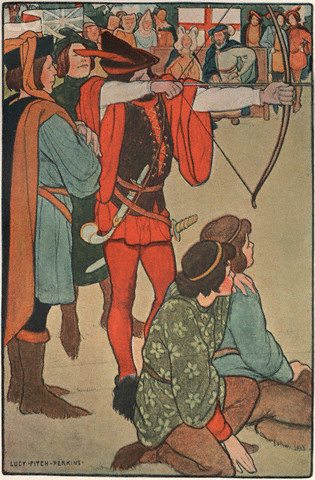