William Momberger was born on June 7, 1829, in Frankfurt-am-Main, Germany. He studied painting and lithography in his homeland before emigrating to the United States in 1848, a year of revolution in Europe. Settling in New York City, he set up a lithography firm, Coughey and Momberger, as early as 1852. His partner was John Coughey (or Caughey), a wood engraver.

Throughout the 1850s and '60s, Momberger created lithographs and engravings for books, newspapers, banknotes, and other documents. He illustrated Duyckinck's Cyclopedia of American Literature (1856) and the Gallery of American Landscape Artists. He may have been in Indiana as early as 1855 when his illustrations appeared in the book New Purchase, or Early Years in the Far West by Robert Carlton (New Albany, Indiana: Nunemacher, 1855). Momberger also created images from the Civil War and traveled in Indiana, Wisconsin, Iowa, and Minnesota. Extant lithographs place him in Fort Wayne, Evansville, and Vincennes, Indiana.

Momberger lived in Morrisania, New York, where he was counted in the 1860 census as an artist and in the 1870 census as a portrait painter. He was still active as late as 1888 and died on April 9, 1895. Momberger was buried in Woodlawn Cemetery in The Bronx, New York. (Thanks to an anonymous reader for providing that information.) The obituary of a "retired illustrator" named William H. Momberger of Newark, New Jersey, appeared in the New York Times on December 12, 1933. That William Momberger may very well have been the son of the artist in question here, as he was born in New York in about 1851.

A descendant of William Momberger has collected images and compiled a bibliography on the artist's works. You can see them at this website:

You can find more information on William Momberger in:


Thanks to Anonymous for providing the date of death and the place of burial for William Momberger.

The Riley Festival takes place this weekend, October 4-7, 2012, in Greenfield, Indiana. The four-day festival commemorates the life and work of "The Hoosier Poet," James Whitcomb Riley. Born on October 7, 1849, in Greenfield, Riley was at one time among the most popular and beloved of American poets. In addition to being a poet, Riley was a newspaper columnist, a public speaker, and--in his younger and leaner days--a sign painter and house painter. He is supposed to have painted the old house across the street from my family's home.

Riley authored scores of poems which were collected in more than three dozen books. Among his most famous poems are "The Old Swimmin'-Hole," "Little Orphant Annie," and "The Raggedy Man." The last two titles inspired two younger men--Hoosiers both--in their own works. Harold Gray created "Little Orphan Annie," a comic strip that ran in newspapers for nearly ninety years. Johnny Gruelle and his family were behind Raggedy Ann, the little rag doll so well loved by American children, and drew her name from those two poems. The poem "Little Orphant Annie" is memorable for its refrain

An' the Gobble-uns'll git you

Ef you
Don't
Watch
Out!


Riley was an artist himself, but he left the illustration of his books to those more accomplished than he. They included Howard Chandler Christy, Ethel Franklin Betts, E.W. Kemble, and A.B. Frost. Perhaps no other illustrator is more closely identified with Riley's work than Will Vawter (1871-1941). Though twenty-two years separated them, Riley and Vawter were friends, based in part on their shared memories of childhood in small-town Indiana. Born in Virginia, Vawter grew up in Greenfield, Riley's home town. In 1899, Riley wrote to Vawter: "Simply you are divinely ordained to succeed. And now as I forecast you must prove it." With that, Vawter became Riley's handpicked illustrator.

Other Indiana illustrators who contributed to Riley's books included Virginia Keep Clark (1878-1962), William F. Heitman (1878-1945), and two artists of the Hoosier Group, Richard Buckner Gruelle (1851-1914) and T.C. Steele (1847-1926). (R.B. Gruelle was Johnny Gruelle's father and a friend of Riley. The two men lived close by each other in Indianapolis and Riley was a frequent visitor in the Gruelle home.) Mary Catherine McDonald (1852-1897), about whom little is known, was another Riley illustrator. Riley was also a mentor and benefactor to younger authors, including poet and illustrator Evaleen Stein (1863-1923) of Lafayette, Indiana. Among the more accomplished of Riley's illustrators was Franklin Booth (1874-1948). His full-color drawings for Riley's fantasy poem-play, The Flying Islands of the Night (1913), are simply breathtaking. Booth's interest in and knowledge of architecture are on full display in these drawings. His trademark trees, clouds, and floating and flying objects can be found in almost every image. You can see all of Booth's illustrations on a blog called "Golden Age Comic Book Stories," here.

Ambrose Bierce (1842-1913), an adopted Hoosier, an author, and an artist himself, defined reading as:


The general body of what one reads. In our country it consists, as a rule, of Indiana novels, short stories in "dialect" and humor in slang. (From The Devil's Dictionary.)

If you substitute "poems" for "short stories" (thereby throwing Riley into the mix) and recognize that George Ade was the leading author of "humor in slang," you'll see that Indiana authors were a dominant force in American literature in the late nineteenth and early twentieth centuries. James Whitcomb Riley played his part in that. If he isn't well known anywhere else today, he is remembered at least in his hometown this weekend. 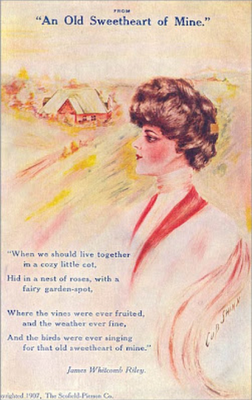