Ours is a cancel culture in which art is permitted to serve a political purpose or none at all. In other words, any art that is not propaganda is to be censored, bowdlerized, suppressed, cancelled, eliminated, or destroyed. Right now it is statuary that is bearing the brunt of the anti-art, anti-history, and anti-culture movement in the West. Once the destroyers are done with sculpture, they are certain to move on to other forms. Museums and libraries are likely targets. The nation's cultural and educational institutions should probably start thinking about how they're going to protect their collections. After all, it's a lot easier for a single destroyer to slip into the stacks and burn everything there is about Andrew Jackson or Christopher Columbus than it is to topple a statue. The act might not be as public or ostentatious, but it would be effective nonetheless. If the goal is to destroy the past and all knowledge of the past, then words and images must go into the memory hole in the same way that statues are decapitated, burned, dumped into lakes, or dragged through city streets like an American serviceman in Mogadishu.

Movies, too, are being cancelled. Gone with the Wind (1939) has joined Song of the South (1946) on the list of forbidden works. Never mind that it includes a performance by Hattie McDaniel, the first by a black actor to win an Academy Award. We cannot be permitted to see it. Other movies and television shows can't be far behind.

Animated film hasn't escaped the wrath of the cancelers and destroyers. Hank Azaria, an American of Sephardic Jewish extraction, can now no longer provide the voice for the South-Asian character Apu on The Simpsons. Instead, Apu and other characters in animated series will have "race"-appropriate actors speak in their voices. It is one of the absurdities of our age that actors, who are in the business of pretending to be something they are not, will not be permitted to pretend to be something they are not.

One of the cancelled film performances is by James Baskett, a chemist, chiropodist, mortician, and newspaper columnist who was of course best known as an actor. He won a special Oscar for his performance in Song of the South, making him only the second black actor and the first black man to win the the award. In Song of the South, he played opposite the first black woman to win an Oscar. By my estimate, Song of the South was the first movie to feature two black Oscar winners. (Mr. Baskett's winning the award was of course still in the future when the movie was being filmed.) Nevertheless, we cannot see his or her performance.

In addition to appearing in the live-action sequences of Song of the South, Mr. Baskett provided the voice of Brer Fox in the animated parts. He had previously been the voice of Fats Crow in Dumbo, released in 1941. As far as I know, he was the first black Hoosier to appear in animation or to provide the voice for an animated character. I don't know of any black Hoosier artist to have worked behind the scenes as a storyboard artist or animator.

The police are in the news. Or they were. Now it's people against the police who are getting all of the attention. A couple of years ago, I found an old comic book drawn by one of my favorite comic book artists, Gray Morrow. I had planned at the time to feature it in this space, but that little project slipped away from me. Now the time seems right . . . or wrong, depending on how you look at things. From one angle, you can see Gray Morrow's comic book The Super Cops as a piece of 1970s pop culture: a little cheesy, a little exploitative, but nothing at all serious. Some people will no doubt see it differently. That won't stop me from showing it, as I think Gray Morrow's cover for The Super Cops, published forty-six years ago this month, is a beautifully done piece of comic book art. 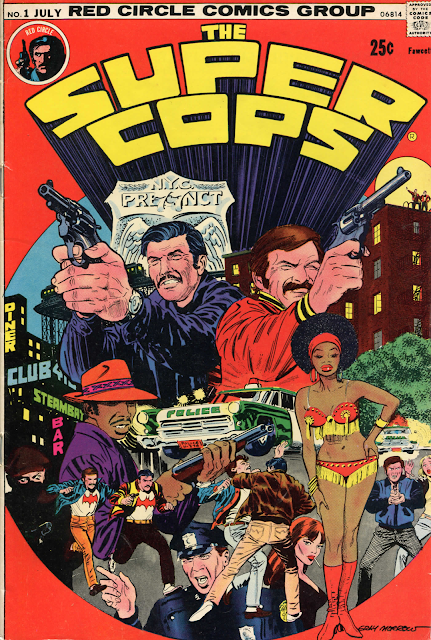 The Super Cops, published by Red Circle Comics in July 1974, was based on a movie of the same name released in March of that year. The Super Cops was directed by Gordon Parks (1912-2006), a man of extraordinary accomplishment who had previously directed Shaft (1971), now considered one of the first movies in the genre known as blaxploitation. By the way, Gordon Parks' second wife was the daughter of a cartoonist, E. Simms Campbell (1906-1971).

In 1975, American International Pictures released Friday Foster with Pam Grier in the title role playing an intrepid magazine photographer. She was supported by Yaphet Kotto, Eartha Kitt, Scatman Crothers, and Carl Weathers. (During his long and varied career, Gordon Parks was also a magazine photographer.) Friday Foster is considered a blaxploitation film. It was based on a comic strip, the first of the postwar era and the first widely syndicated comic strip with a black woman as its title character. (It was preceded by Torchy Brown in "Dixie to Harlem", which was drawn by Jackie Ormes [1911-1985] and syndicated in 1937-1938.) Friday Foster began on January 18, 1970, with Jim Lawrence as writer and Jorge Longarón (1933-2019) as artist. Longarón was with the strip for most of its run. Gray Morrow took over on December 24, 1973, and carried it through to its end on February 17, 1974. Below is an image of the daily from January 29, 1974. Note the artist's inscription under the last panel.

Dwight Graydon Morrow was born on March 7, 1934, in Fort Wayne, Indiana. He attended North Side High School in his hometown and the Chicago Academy of Fine Arts, where he received the sum total of his formal art training in just three months under Jerry Warshaw (1929-2007). Recognizing Morrow's talent, Warshaw told his young student, "Pack your bags and get started," and that's what Morrow did.* In 1954, he moved to New York City and found enough work to keep himself from starving. Not long after arriving in the city, he decided to look up political cartoonist Eugene Craig (1916-1984), formerly of the Fort Wayne News-Sentinel but by then with the Brooklyn Eagle. Craig took Morrow to a meeting of the National Cartoonists Society (NCS) and introduced him to giants, including Hal Foster (Prince Valiant), and future giants, including Wally Wood (1927-1981). Morrow went on to work with Wood, as well as with Al Williamson (1931-2010) and Angelo Torres (b. 1932). That made his start as one of the great American cartoonists, comic book artists, and science fiction illustrators of the 1950s and after.

In 1956, Morrow got caught in the draft and spent two years in the U.S. Army, including service in South Korea. He returned to civilian life and his career as an artist in 1958. In the 1960s, he drew comic book stories for Classics Illustrated. In The Illustrated Story of Whaling, a title in the World Around Us series (#W28, Dec. 1960), Morrow depicted in his original artwork a number of black whalers in an attempt at historical accuracy. He later told of how his publisher, Roberta Strauss Feuerlight, made him change their features so as to avoid controversy. Unfortunately, I don't have a copy of this comic book or any images of Morrow's artwork to show you.

You can read more about Gray Morrow on the Internet and in magazines and books, including Gray Morrow: Visionary, published in 2001 by Insight Studios Group. His work is characterized by flawless draftsmanship, an extraordinary ability to handle the human face and form, great skill at composition, and an excellent sense of color. His sense of aesthetics placed him above most comic book artists of his time and ours. Mr. Morrow died on November 6, 2001, in Kunkletown, Pennsylvania. May he rest in peace.

*After leaving art school, Morrow worked for a Chicago art studio. He also met a fellow Hoosier, Allen Saunders (1899-1986), famed author of Mary Worth, Big Chief Wahoo, and Steve Roper, who encouraged him to get into the field of syndicated comic strips. Morrow gave it a try, but only later did he find success as a not-always-credited artist on such strips as Buck Rogers, Flash Gordon, Rip Kirby, and Tarzan.