Traces, the magazine of the Indiana Historical Society, has just printed an article on the life and work of Franklin Booth, perhaps the most accomplished of Indiana's illustrators and brother of Hanson Booth, subject of the previous posting. The article is called "Billowing Clouds, Towering Timbers," and it was written by Thomas E. Rugh. Rather than compete with Mr. Rugh's article, I will offer some artwork by Booth. You can read more about him in Traces for Spring 2011.
Text and captions copyright 2011 Terence E. Hanley
Posted by Terence E. Hanley at 7:44 PM 1 comment:

In life and since his death, Hanson Booth has been overshadowed by his older brother, Franklin Booth, a prodigious talent with an inimitable technique. Rather than compete with his brother, Hanson Booth chose different media and different markets and met with no small success himself.

Hanson Booth was born on May 19, 1886, near Noblesville, Indiana, one of a large brood reared by John T. and Susan Wright Booth. Although their father did not always understand the artistic impulse, the Booth children were encouraged in their art by their mother. Largely self-taught as an artist, Franklin Booth was something of a late bloomer and wasn't published until he was in his mid twenties (in the Indianapolis News). Hanson Booth took a different path. He attended Indiana University and was illustrator and cartoonist for the yearbook, The Arbutus, in 1903-1904. Next came studies at the Chicago Art Institute under John Vanderpoel and C.F. Browne in 1905, and the Art Students League under George Bridgman in 1907. That same year, Booth began his career as a magazine illustrator. His older brother had already blazed a trail to New York City. The two men alternated between there and home for many years, sharing a studio in New York and an add-on to the Booth house in Indiana.

Hanson Booth's list of magazine clients is long and impressive: The American Magazine, The Century, The Delineator, Everybody's Magazine, Harper's, Home, Pictorial Review, The Reader, Red Book, Scribner's, and Woman's World. He also illustrated many books, including Find the Woman by Gellett Burgess (1911), The Jack-Knife Man by Ellis Parker Butler (1913), Almanzar by Frank J. Davis (1918), and Renfrew in the Valley of Vanished Men by Laurie York Erskine (1936). Franklin Booth carved out a place for himself as a master of pen and ink. By choice or necessity, Hanson Booth worked in pencil and charcoal. The Indianapolis Star praised his work for its rich tonal quality and suggestion of painterly depth.

With America's entry into the First World War, Hanson Booth enlisted as a private and saw combat at Aisne-Meuse, Guise-Aisne, and Meuse Argonne in France. He also served in occupied Germany after the war, advancing to the rank of lieutenant. He was active in veteran's organizations after the war and was also a member of the Salmagundi Club and the Society of Illustrators. In 1920, Booth built a large stone house on thirty-five acres in Woodstock, New York, an artist's colony that would eventually include Indiana artists Henry Maust and John Striebel. In later years, Booth's output declined as illness advanced. He died on February 26, 1944, near Woodstock. His older brother Franklin survived him by four years. 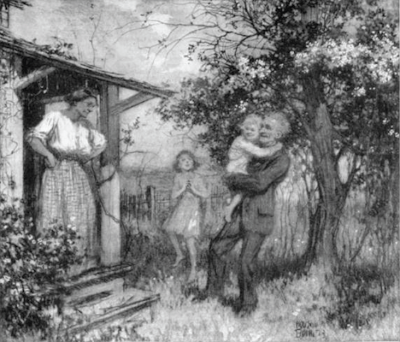 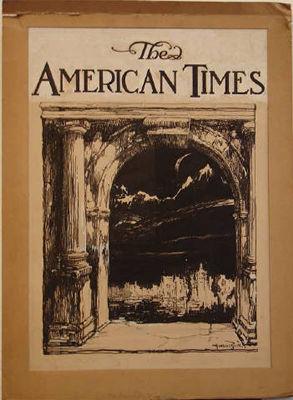 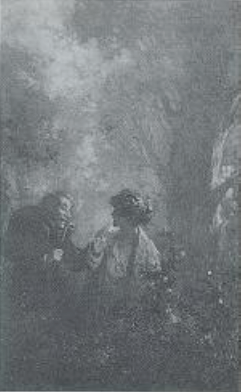 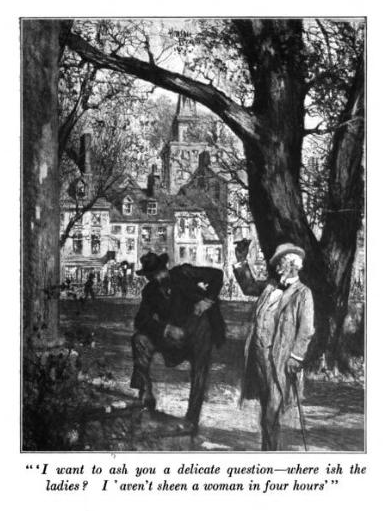 Charles Macowin Tuttle was a painter, illustrator, engraver, teacher, writer, and lecturer who lived a full life as an artist. He was born on November 3, 1861, in Muncie, Indiana, and studied under William Merritt Chase and Frank Duveneck in his home country and under Jean Paul Laurens at the Académie Julien in France. His specialty was wood engraving for which he invented a process himself.

Facts on Tuttle's life are scarce. He was a member of the artist's colony at Colebrook, Connecticut, and of the Salmagundi Club, the National Arts Club, and the American Art Association of Paris. The Salmagundi Club established the Macowin Tuttle Memorial Award in his honor. Tuttle's art is in the collections of Corcoran Gallery of Art, the National Gallery of Art, the Library of Congress, and Yale University. The only reference I have found to his illustrations is to a series of woodcuts depicting a meeting of Herbert Hoover and British Prime Minister Ramsay MacDonald at the president's retreat in Rapidan, Virginia.